What is a frozen shoulder?

Frozen shoulder is a condition characterized by pain in the shoulder joint often radiating into the upper arm as well. The pain continues for a couple of weeks and gradually worsens. After several weeks or months, the shoulder becomes increasingly stiff. The pain is a result of inflammation inside the shoulder capsule. Restricted movement is caused by a gradual stiffening of the shoulder capsule itself. This is called fibrosis.

A frozen shoulder will often occur without a clear cause and is thus often initially misdiagnosed as bursitis or rotator cuff tendinopathy. A correct diagnosis can take several weeks and sometimes months. Sometimes, there is an obvious connection with an earlier event (a fall or an operation) or symptom. The dull, aching pain is almost constant and worsens with sudden movements, after which the pain often lingers for a little while. It is uncomfortable to keep the arm still for too long and it becomes impossible to lie on one’s side.

The pain is mainly felt deep within the shoulder and, frequently, in the upper arm as well. You will experience a reduced range of shoulder movements even when aided by someone else. This causes difficulties when getting (un)dressed, reaching for something high up, driving a car or putting something in your back pocket. Frozen shoulder knows three stages:

• The ‘freezing’ phase – this can last anywhere between six weeks up to a maximum of 9 months. The pain becomes gradually worse and the range of movement becomes progressively more limited.

• The ‘frozen’ phase – the pain gradually lessens but the shoulder’s stiffness remains. This stage lasts four to twelve months.

• The ‘thawing’ phase – the pain diminishes even more and your range of movement gradually returns to normal, or very nearly. This phase can take five months to two years. About 5 percent of people suffering from a frozen shoulder will continue to experience pain and stiffness in their shoulder even after this time.

A frozen shoulder is almost always entirely resolved but it takes a long time: ten months to more than three years. Pain control and physiotherapy can have a positive effect on the rehabilitation process.

Frozen shoulder incidence and who does it affect?

About 2 – 5% of the Dutch population has developed a frozen shoulder at some point, the injury usually occurring between the ages of 40 to 60. Those with diabetes are at an increased risk; around 10 – 23% will at some point develop a frozen shoulder. They generally take longer to recover and it is harder to predict whether the treatment will be entirely successful or not. Other medical disorders such as an overactive or underactive thyroid, Parkinson’s disease and certain heart and vascular diseases such as a stroke, can increase the risk of developing a frozen shoulder as well.

Self-help for a frozen shoulder

It is helpful to keep your frozen shoulder mobile, at least as much as you can bear. If necessary, you can try and adjust your work routine. When the pain becomes less and mobility improves, you can start expanding your daily activities again. You will notice a return of strength in your arm; additional exercises are unnecessary. 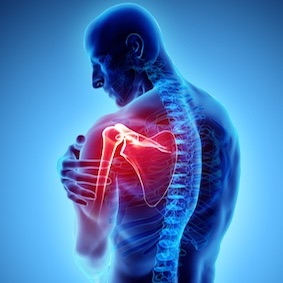 Physiotherapy treatment for a frozen shoulder

Your physiotherapist offers advice on how your shoulder should be used during the different phases. He will help you circumnavigate the limitations of your daily activities at work for example or when playing sports, driving a car or cleaning.

Your physiotherapist will also advise you what you should and shouldn’t be doing with your frozen shoulder. If your rehabilitation process does not follow a normal trajectory, the physiotherapist will, together with you and your GP, propose additional tests and treatment.