Tennis elbow is an injury that results from overuse of forearm tendons and/or muscles (known as extensor muscles of the wrist). The tendons of these muscles attach to the bony bump on the outside of the elbow. Sometimes the inner part of the elbow has been overused – this is called a golfer’s elbow. A tennis elbow is painful but does not cause any long-term damage. Most elbow injuries will eventually resolve within 6 months.

The main cause for elbow injuries is overuse of the forearm muscles that are used to straighten your hand (tennis elbow) or bend it (golfer’s elbow). Oddly, only 5% of all tennis elbows result from playing tennis. However, an estimated 50% of all tennis players will suffer from tennis elbow over the course of their career. Common as well as uncommon activities can cause this specific injury. It can, for instance, develop in someone who has been carrying out their everyday activities as normal, but whose body has unknowingly become weaker. Their muscle loading exceeds their muscle tolerance for loading.

A painful sensation on or around the bone on the outside of the elbow is a very common condition. The pain may also travel down towards the muscles in the forearm and increase with specific movements such as lifting (heavy) objects overhand, squeezing (such as a handshake) and stretching the wrist while keeping the elbow straight. Holding up small objects such as a knife, a fork, a cup or a pen can become challenging. Some people find it hard and painful to fully extend their arm. The use of a computer mouse can cause painful symptoms too.

Tennis elbow incidence and who does it affect?

About 2 percent of the population will be affected by a tennis elbow at some point in their lives. This figure rises to 10 percent amongst people between the ages of 40 and 50. It usually affects the ‘dominant arm’ (the one used for writing). A tennis elbow isn’t usually sports-related.

The injury is usually caused by overuse of your forearm muscles in repeated actions, such as: painting, wringing clothes, using a screwdriver or when frequently using a computer mouse.

It’s important to know that in most cases a tennis elbow improves by itself. To speed up the rehabilitation process, it is advisable to stimulate circulation by continued use of the affected arm through applying light pressure. Avoid movements that bring on the pain as much as possible. There is no evidence that continued physical exercise can be harmful. You can try exercising using a special elbow armband or brace to relieve the pain, but these won’t accelerate your recovery process.

Other things you can do: carefully stretch out your wrist, turning your fingers toward the inside of your forearm and slowly move your arm towards a fully extended position. Continue moving your arm though without applying any stress and refrain from any movements that cause pain. 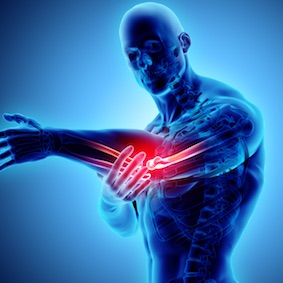 Physiotherapy treatment for a tennis elbow

A physiotherapist can offer advice on aspects such as (work) posture, resuming your everyday activities and how to gently build those up. He or she can recommend specific exercises. Alternatively, he could use specific techniques such as deep tissue massage (friction massage) to treat your tennis elbow.